The TSA announced on Oct. 29, 2010, that security pat-downs may become the norm going forward. (Photo by Jeff Topping/Getty Images)

NEW YORK (1010 WINS/WCBS 880/CBS 2/AP) — As the controversy over new full-body scanners at airports heats up, elected officials in the Tri-State Area and Washington D.C. are weighing in and speaking out. 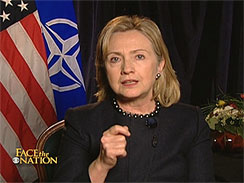 Clinton said there was clearly a need for the tighter security. But she said the government should explore ways to “to limit the number of people who are going to be put through surveillance.”

The Secretary of State said she understands “how offensive it must be” for some people to undergo the searches. She says there’s a need to strike “the right balance” and to “get it better and less intrusive and more precise.”

And when asked if she would submit to a pat-downs herself, Clinton responded by saying “Not if I could avoid it. No, I mean, who would?”

The new scans show naked images of the passenger’s body, without the face, to a screener who is in a different location and does not know the identity of the traveler.

The hands-on searches are used for passengers who don’t want those scans or when something suspicious shows in screening, or on rare occasions, randomly.

Speaking from the Lower East Side on Sunday, Sen. Chuck Schumer said Americans must deal with the current system of security — at least for now, 1010 WINS’ Glenn Shuck reported.

“If you’re going to travel you have to cooperate,” Schumer said, “our job is to make sure that if there’s a real public outcry, to make sure it’s readjusted.”

Schumer talked about his experiences moving through airport security.

“I don’t think I’ve been through the kind of invasive body search that they’re talking about,” Schumer said, “every so often, my name comes up and I get patted down.”

“It’s fine with me. I’ve never seen them be inappropriate or something that made me uncomfortable in any way.”

The senator also said there was no easy answer to the contention surrounding privacy and body searches at airports, WCBS 880’s Mike Xirinachs reported.

“You know, I don’t think this is a simple issue. You can be just for privacy, and then God forbid, a plane blows up, you say that it went too far one way,” Schumer said.

“I think we’ll get to a balance that the public can be satisfied with,” Schumer said. Some passengers are not taking too kindly to the new measures and plan to protest on the busiest travel day of the year.

On the day before Thanksgiving, airports could see even more than the usual disruptions because of a loosely organized Internet boycott of full-body scans by fed-up travelers.

Body scans take as little as 10 seconds. But people who decline the process must submit to a full pat-down, which takes much longer. That could cause a cascade of delays at dozens of major airports.

Even if only a small percentage of passengers balk, experts say it could mean longer lines, bigger delays and hotter tempers.

On Saturday, President Barack Obama, speaking at the NATO summit in Portugal, said he understood people’s frustrations and has asked security officials whether there was a less intrusive way to screen U.S. airline passengers.

Obama said he’s told the U.S. Transportation Security Administration: “You have to constantly refine and measure whether what we’re doing is the only way to assure the American people’s safety. And you also have to think through, are there ways of doing it that are less intrusive.” The president’s message may have had a quick impact.

The head of the Transportation Security Administration, John Pistole, said in a statement Sunday afternoon that the agency is constantly evaluating and adapting security measures and there is a continual process of refinement and adjustment to ensure air safety.

Pistole’s statement toned down his earlier stance, expressed on a Sunday news show, that in the interest of safety passengers would have to put up with sometimes invasive and uncomfortable screening.

The U.S. has nearly 400 of the advanced imaging machines deployed at 70 airports, expanding to 1,000 machines next year. So not all airports have them and not all travelers are selected for scans.

Newark Liberty is one of the airports in which the scanners are being used and last week the ACLU teamed up with some New Jersey lawmakers to push through a resolution that calls on the U.S. Congress to end full-body scans and pat-downs.

“Security is never absolute and it never will be,” ACLU Executive Director Deborah Jacobs said.

New York City Council member David Greenfield is also working on legislation to ban the scanners from all buildings in New York City — including airports.

SOME FOOD DONATIONS SLOW AHEAD OF THANKSGIVING HOLIDAY