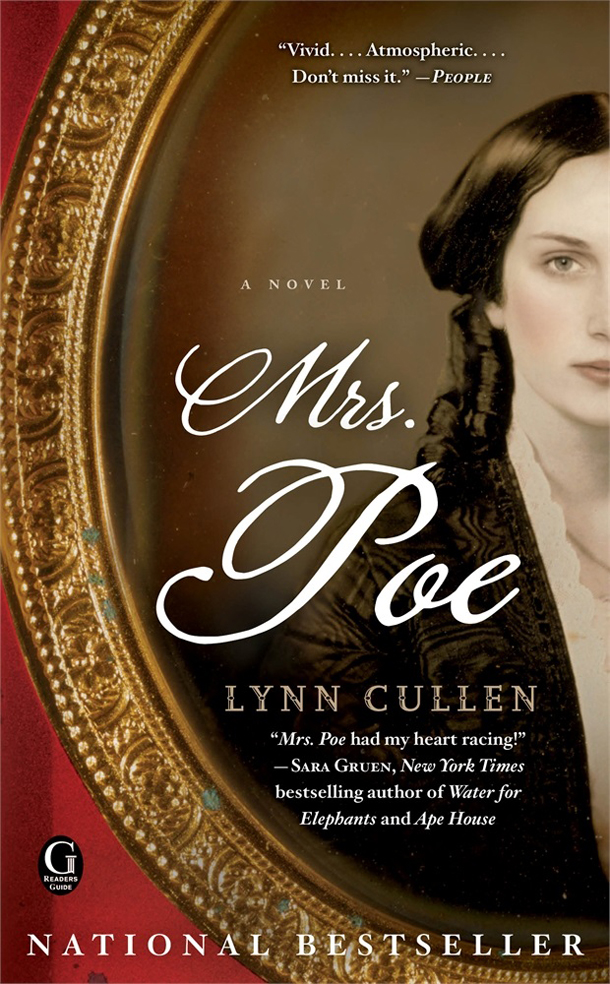 Lynn Cullen grew up in Fort Wayne, Indiana, the fifth girl in a family of seven children. She learned to love history combined with traveling while visiting historic sites across the U.S. on annual family camping trips. She attended Indiana University in Bloomington and Fort Wayne, and took writing classes with Tom McHaney at Georgia State.  While her camping expeditions across the States have become fact-finding missions across Europe, she still loves digging into the past.  She now lives in Atlanta with her husband, their dog, and two unscrupulous cats.  Her latest book, Mrs. Poe is currently a Target Book Club Pick.

Told through the eyes of poet Frances Osgood, Mrs. Poe traces the stellar rise of Edgar Allan Poe upon the publication of ‘The Raven’ in 1845 to his plunge from grace just one year later.  The cause (at least in my mind):   In addition to Poe’s self-destructive streak formed during his traumatic childhood, his affair with Frances Osgood herself.  In Mrs. Poe I examine how the real people and places of 1845 New York City played a part in the Poe-Osgood affair.  To that effect, in this scene we join Margaret Fuller, who would become a pioneer in American feminism, when she takes Frances to meet Poe at the Astor House, then the U.S.’s most opulent hotel, built on the fortune John Jacob Astor made on the skins of millions of North American bears and beavers.

Related: Read An Excerpt From “Whistling Past The Graveyard”

Two weeks later, I was tucked beneath a thick buffalo robe, riding downtown in Miss Fuller’s carriage. I had been too nervous to enjoy the trip or to appreciate Miss Fuller’s carriage, pulled by a clopping bay. That Miss Fuller was the only woman in New York to support herself by writing, let alone to have enough leftover to buy her own buggy, mattered little to me at that moment. Why had I agreed to meet Poe? And why would he want to meet me? He had already made and broken an appointment the previous week. I had been relieved by the cancellation, only to become agitated once more when he set up a different date. As suddenly and inexplicably as he had championed my poetry at the New York Society Library, he could withdraw his support if I said something wrong. Who knew what triggered the man’s tomahawk?

Miss Fuller jerked on the reins. “Here we are.” She looked at me expectantly, as if I should climb out of her trim little gig without her.

“Shouldn’t we wait for the doormen to take your reins?” I asked.

“Would you rather I came with you to the slum?” I asked.

“And have you jilt Mr. Poe? I wouldn’t dare.” Miss Fuller steadied her horse, then waved me toward the hotel. “Go on. It will be good for your books.”

Reluctantly, I climbed out from under the heavy robe. I held my breath as the carriage rattled away.

I found myself on the sidewalk before the hotel, contemplating an immediate about-face up Broadway when I felt someone’s presence behind me. Before I could move, a man said, “Lord help the poor bears and beavers.”

I turned to find Mr. Poe, his black-lashed eyes trained upon the building before us. Without a hello he said, “Davy Crockett’s words, upon first seeing this pile.”

I hesitated. “Because of Mr. Astor’s fur trade?”

He continued as if I had not spoken. “But Crockett was mistaken. It wasn’t the bears and the beavers that made Astor’s fortune. It was the opium he bought from the Chinese.”

I looked at him in surprise. “Mr. Astor deals in opium?”

He kept his gaze upon the hotel. “Whenever you see this much wealth, assume that someone dirtied his hands. Fortunes don’t come to saints.”

“I’ve never thought of that.”

He gave me a sharp glance. “Really?”

I drew back, chastened.

“Mr. Astor prefers to be known for the slaughter of animals rather than for his association with opiates. I wonder why that is.” He lowered his sights to me. “Shall we enter, Mrs. Osgood?”

So he did recognize me. I preceded him inside, into the hot maw of the lobby. As we walked past impressive people dressed in beautiful clothes, I felt low and insignificant, a ne’er-do-well’s abandoned wife, although my gown was as fine as anyone’s. What a sham I was.

I stopped to face him. “Congratulations on the success of ‘The Raven.’ ”

He frowned as if insulted.

“People love it. I hear talk of it everywhere I go.”

“ ‘People’ have no taste. Don’t tell me that you think it’s a work of genius.”

Was this a trick? I scanned his dark-rimmed eyes for clues.

When I did not answer he said, “Thank you, Mrs. Osgood. You’re the first honest woman I have met in New York.” He shook his head. “It is my luck that I will become famous for that piece.”

Still not sure that I shouldn’t be gushing, I switched to safer ground. “May I ask what you are working on now?”

“A book on the material and spiritual universe.”

He watched me coolly.

“I’m sorry. I thought you were joking.”

“Of course not. Excuse me.”

“Although I wish I were. It will never sell.”

“Not any of my works with a true idea in them. People want to be titillated or frightened. They don’t want to think.”

I smiled hesitantly. What did he want with me?

“This is why I singled out your poems in my lecture,” he said. “They have real feeling in them, if one reads between the lines.”

I could not help but be disarmed. “Thank you. I find that the thoughts spoken between the lines are the most important parts of a poem or story.”

“I am particularly taken with your poem, ‘Lenore’:

So when Love poured through thy pure heart his lightning,

On thy pale cheek the soft rose-hues awoke—

So when wild Passion, that timid heart frightening,

Poisoned the treasure, it trembled and broke!

I swallowed my surprise. “You memorized it.”

An elegant couple drifted by, he in succulent wool and she in layers of costly lace. Mr. Poe frowned. “It spoke to me somehow, and not just because I had written a poem with the same title and had used the name in ‘The Raven.’ ”

He stared at me.

I looked away. Why had Mr. Poe called this meeting? Surely he had better things to do than to raise the hopes of an unknown writer.

“You are probably wondering why I wished to meet you.”

I drew in a breath.

“Actually, it is on behalf of my wife.”

Lynn Cullen grew up in Fort Wayne, Indiana, the fifth girl in a family of seven children. She learned to love history combined with traveling while visiting historic sites across the U.S. on annual family camping trips. She attended Indiana University in Bloomington and Fort Wayne, and took writing classes with Tom McHaney at Georgia State.  While her camping expeditions across the States have become fact-finding missions across Europe, she still loves digging into the past.  She now lives in Atlanta with her husband, their dog, and two unscrupulous cats.  Her latest book, Mrs. Poe is currently a Target Book Club Pick.
Comments